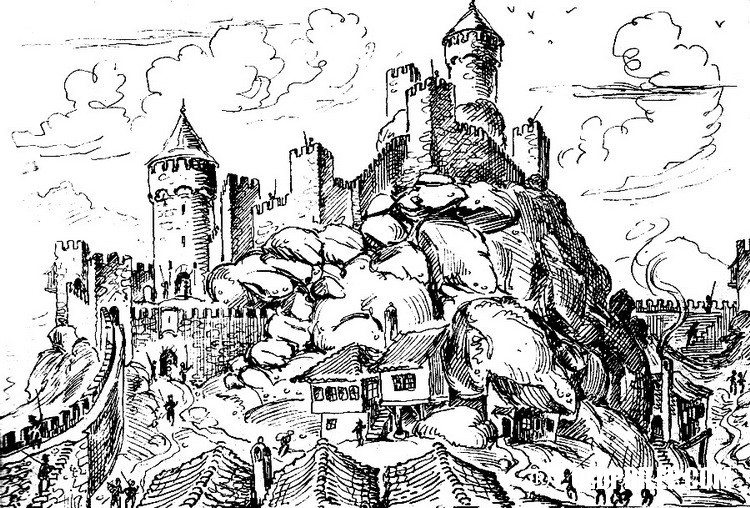 The history of Prilep is as old as, the life in the Pelagonia region. Prilep is situated on the northeastern part of the rich plain, gifted with natural conditions and life treasure. The man has settled here since the oldest times, adjusting the nature to his needs. Prilep  became an important political economic and cultural center very early. Connected with a great number of natural roads, whichdeveloped live links from south to north, Prilep area was exposed to various cultural and political influences that have left traces on its historic development. The oldest traces lead to the early Neolithic with the locality called Peshterica, through middle and late Neolithic with lots of sites as: Chuka, Ali Chair, Mogila, Bakarno Gumno, till the Bronze and Iron age, where the discovered necropolis, crypt findings and tools come from.

The name of the medieval town of Prilep was first mentioned in the chronicle of John Skylitz at the end of XI century. It was built on one of the hills in the locality Varos, which consists of the stone heap with wonderful shapes and colors. Today, the medieval items are Marko’s Towers, the last remnants of the former city. In the tenth century, Prilep grew up into feudal town and military center for the Pelagonija region. It was a shelter place to King Samuel in the crucial days of the battle against Byzantium. There is a possibility that Samuel King died in Prilep. Prilep remained under Byzantine rule until 1334. King Volkashin ruled with theterritory of Prileparound 1350. In that time Prilep maintains trade relations with Dubrovnik. After Volkasin’s death in the battle against the Turks, his nephew, King Marko,inherited him, a person with immense strength and courage, protector of the people, mentioned in lots of legends and folk songs. The Archangel Michael monastery preserved frescoes of Volkasin and King Marko

In Prilep, in the periodbefore the Turks, there were: yards, houses, towers, churches and other buildings. The people from Prilep and surrounding villages were mostly engaged in agriculture but also in manufactures: brick workers, carpenters, potter makers, blacksmiths, tailorsand others. Prilep city came under Ottoman rule in 1385/86 year. The Turkish presence in Macedonia, and thus in Prilep, lasts more than five centuries and it has left traces, which still testify to that period. Macedonian people for the whole period of Turkish rule, resisted over rough national and religious humiliations of the conquerors in many different ways, by raising riots and uprisings. In the middle of XVI century,  1564/65 year, is well known riot, Prilep - Mariovo Rebellion. Significant data about Prilep in XVII century, left the Turkish writer of travel books Haji Kalfa, Evliya Çelebi and others. Evliya Çelebi in 1668 mentioned that the town had 1,000 houses and 200 shops.

In his journey through Prilep in 1807, the French consul Henri Pukvilj noted that the city had houses from 1000 to 1100 and led the trade with grain, wool and livestock. The Prilep Fair was one of the largest in Rumelia and lasted 25 days. In the middle of XIX century in Prilep comes to rapid development of handicrafts and trade. The economic development increased the number of inhabitants. Economic strengthening of the city reflected favorably on the cultural development and enabled the literature progress. In 1843,in Prilep,started the first National School, St. Cyril and Methodius. The largest contribution to the development of educational activities had the Macedonian national revivalists, who were teachers in Prilep, Dimitar Miladinov, Jordan Hadzi Konstantinov-Giant, Rajko Jinzifov, Prlicev, Kuzman Shapkarev, Josif Kovachev and others.

Marko Cepenkov (1829-1920) is very famous revivalist from Prilep, collector of folk songs, stories, proverbs, beliefs, customs, myths, dreams and so on. from Prilep region. His work is printed in several volumes. In 1865 in Prilep was opened the first female school, in the churchyard of St. Blagovestenie. In 1867,the city worked with  library, preschool for children and adult Sunday school, and in 1874 itwas opened a kind of teachers’ school. In 1879 it was organized a church choir run by Atanas Badev (1860-1908), a pupil of Nikolai Rimsky Korsakov and author of the composition John Chrysostom liturgy. In 1887 / 8 it is shown the first theatrical performance in the parlor of the female school. In the struggles for national liberation of Macedonia in the second half of XIX century, the city of Prilep played a significant role. In Prilep at that time acted several bands led by Spiro Crne, Dime Chakre, Kone Pavlov and others.

In 1903 on the top Margara, near the village Chanishte in Mariovo, occurred one of the biggest battles between Turkish asker and joined bands led by Gorce Petrov.

During the Balkan Wars (1912-13) in Prilep region there are fierce fightings. After the defeat of the Turks and their expulsion from Macedonia, Prilep has become a part of the Kingdom of Serbia.

Due to the proximity of the Thessaloniki Front, at the end of World War I (1914-1918 year) Prilep ended robbed and economically exhausted. After the ending, the city enter into the Kingdom of SCS, later called the Kingdom of Yugoslavia. The new state has not accomplished the expectations of the people. On the other hand spreading the ideas of the great October Socialist Revolution in Russia, brought in Prilep in 1919 the Communist Party and a liverevolutionary activity between the two world wars. Prilep fell under fascist occupation in April 1941. On April 8 this year the city entered the German fascist army, and on April 26 entered the Bulgarian army. Since the first days of the occupation appeared organized resistance and first partisan detachment. As a result of this, the first shot on October 11, 1941 attack on the Police station, started the uprising of the Macedonian people for liberation. During the Liberation war, 650 fighters from Prilep were killed and 15 were declared Folk heroes, 154 holders of war decorations. For everything that the town of Prilep has done during the Liberation war, receives the Order, National Hero.

The city under Marko's Towers, with its locationin the fertile plain Pelagonia , rich forests and mountains with ore, traffic intersections and moderate-kontinenalna climate, producing grain, poppy and tobacco, and the first-class marble, antimony, arsenic, rubies, lignite and others,  has always had great importance for the Republic of Macedonia.

Today Prilep is raised in modern economic, political and cultural center, a step towards a European future.